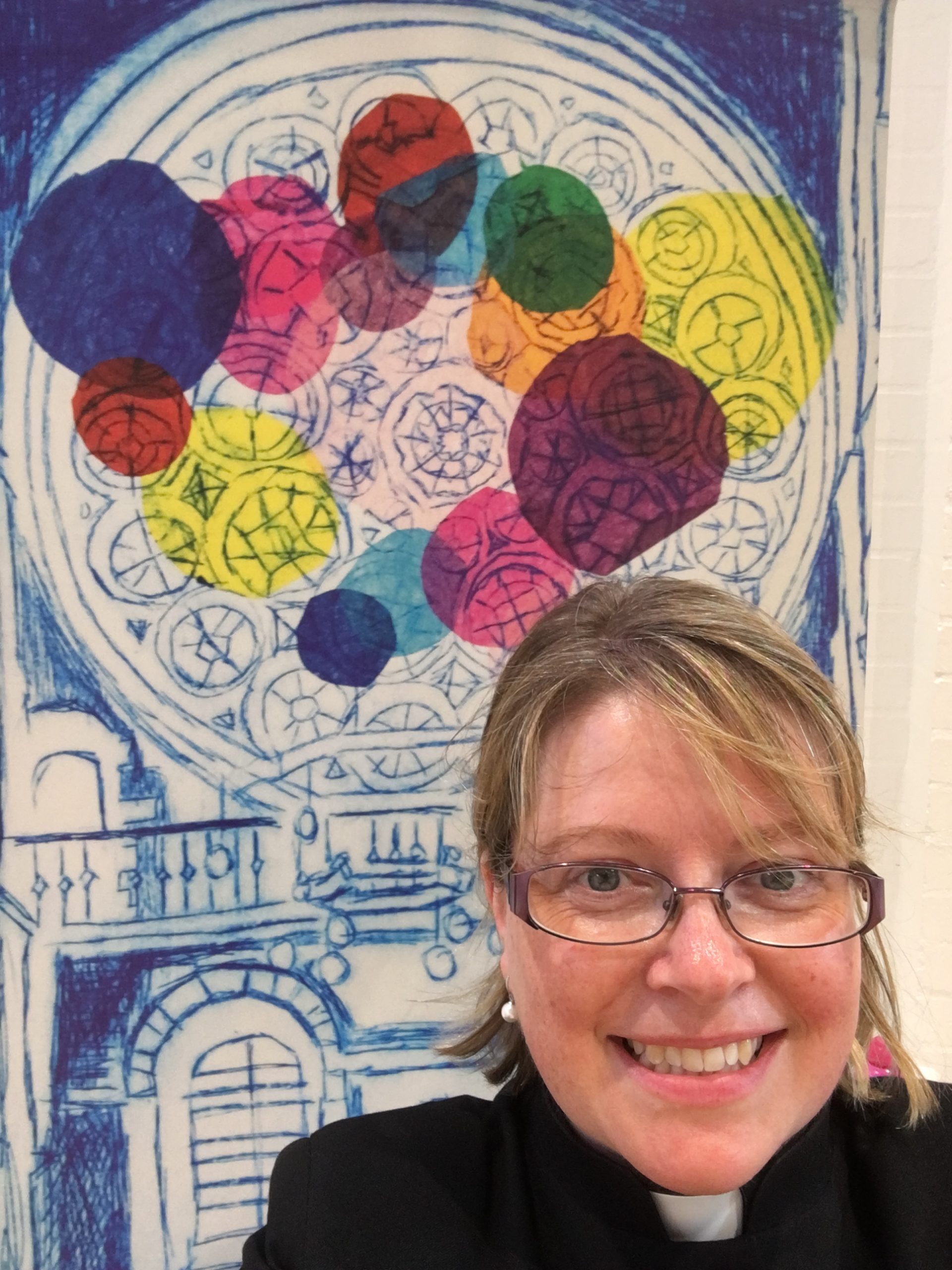 The Revd. Atalie Gaines studied Theology at Westcott House, Cambridge gaining a degree in Pastoral Theology for Ministry (BTh). She served her curacy at St Andrew’s Church in Bedford before moving to Potters Bar to take up the position of Vicar in December 2017.

Before training for ordination Atalie worked for 10 years for Parkinson’s UK, as an Education and Training Officer. She worked with staff in nursing and care homes to educate them about Parkinson’s Disease and its effects on the people that they may care for. She was also a visiting lecturer at Universities in London lecturing about Parkinson’s Disease to Doctors, Nurses, Physiotherapists, Occupational Therapists and Speech and Language therapists.

Atalie has been a member of Girlguiding UK for over 20 years and currently mentors new Guiders who are training to be leaders.

She was recently awarded her NODA (National Operatic and Dramatic Association) 25 year long service award for services to local theatre, where she can be found stage managing and working as backstage crew for local amateur dramatic societies.

Father Ayoob hails from the ancient Chaldean Church in Iraq. He was baptized and confirmed as a baby into Chaldean Christian family.

He joined the Chaldean Catholic monastic order of pontifical right. He trained for ministry in Babel College in Baghdad, which is affiliated to the Pontifical Urban University in Rome.

In 2008, he was ordained a deacon and priest in the Chaldean Diocese of Alqosh in Nineveh.

Later he travelled to Italy, to study for a master’s degree in Social Pedagogy at the Salesian Pontifical University in Rome.

He emmigrated to Canada when ISIS took over the city of Mosul-Nineveh in 2014.

He declared that he wanted to test his vocation as an Anglican priest. He went through the process of discernment including taking courses at VST and training in the Diocese of New Westminster to develop his Anglican formation.

In 2017, Archbishop Melissa Skelton recognised Ayoob’s priesthood and welcomed him into the Diocese of NW and the Anglican Church of Canada. He served his curacy at St Stephen's Anglican Church in West Vancouver. Later he worked as Priest in Charge for the Parish of St Timothy in Burnaby and St Hilda's Church in Sechelt.

He moved to London a few years ago to be reunited with his family and to fulfil his deep desire to continue priestly ministry in the Church of England.

He gained the Overseas PTO through the Diocese of London, Willesden Area. He worshiped at Christ the Saviour Church in Ealing Broadway.

Fr Ayoob is thrilled to be joining the St Albans Diocese and is grateful for the welcome he has received from Bishop Michael Beasley, the Revd Atalie Gaines and the rest of the ministry team. He humbly offers his experience and spiritual gifts and looks forward to flaying a part in helpting the benefice to flourish in the coming years.

Professor David Thomson qualified as an Optometrist in 1980 and following a brief spell working in Portsmouth he enrolled for a Phd to study the effects of viewing computer screens on the eyes. He was awarded a Phd in 1985 and following a three year period as a post-doctorate student investigating visual function in patients with brain damage, he was appointed to the academic staff in the Department of Optometry and Visual Science at City University.

He was awarded a chair in 2002 and served as Head of Department and Associate Dean. After nearly 30 years in post he decided to leave the University to pursue various other interests including developing software for vision testing and screening. He now runs three small software businesses based in Welham Green but still lectures widely in the UK and overseas.

He has been a member of KCM church since 1988 and a regular member of the music group. He studied to become a Licensed Lay Minister with the ERMC and was licensed in 2015.  He is married (to Penny Thomson) and has five grown up children.

In what little spare time he has, he is to be found at Brookmans Park Golf Club!

Elected to serve until April 2022

Elected to serve until April 2024